“We now have data that enables us to tell families what smoking by caregivers is doing to their kids,” says Benjamin Kopp, MD, MPH, a pediatric pulmonologist, principal investigator in the Center for Microbial Pathogenesis in the Abigail Wexner Research Institute at Nationwide Children’s and study leader.

“The goal is to prevent exposures, but if a parent can’t quit or the exposures are beyond the family’s control, we need to be able to mitigate the harmful effects,” Dr. Kopp adds. “This study provides insights into the mechanisms specific to CF that we may be able to target with new therapies.”

The research, published in Thorax, also found that tobacco exposure appears to be underreported or under-recognized by families. Investigators measured nicotine concentrations in the hair of children with CF, to objectively assess smoke exposure. They found smoke exposure at nearly double the rate from that reported in surveys.

CF lung disease begins in early life with inflammation, infection and structural and functional changes, often before respiratory symptoms appear. Then, children with CF typically suffer from a cycle of progressive, chronic respiratory infections that damage their lungs and can lead to respiratory insufficiency and death.

The researchers started this investigation nearly five years ago, after Dr. Kopp and his colleagues noticed several infants with CF had poorer growth and a greater number of and/or more severe infections compared with other infants with CF. The only difference they could find was the first group was exposed to secondhand smoke.

The researchers looked further and found secondhand smoke exposure is associated with growth and lung dysfunction. Since then, the research team collected and analyzed a comprehensive dataset used for this study.

Investigators enrolled 77 infants and children with CF, and 20 healthy children without CF that served as a control group for all analyses. They found nicotine concentrations were elevated in 63 percent of CF patients.

The research team then looked for alterations in arachidonic acid (AA) metabolites, which are intracellular messengers involved in the proper function of the immune system and promoting and resolving inflammation.

They found multiple alterations in AA metabolite concentrations in infants and children with CF and secondhand smoke exposure. Most notably, lower concentrations of prostaglandin D2 was associated with more frequent hospitalizations for pulmonary exacerbations and correlated with lower weight.

These findings were confirmed in a separate cohort of 20 children from Riley Children’s Hospital and Nationwide Children’s and an in vitro model of human macrophages, a type of white blood cell responsible for clearing bacteria.

Next, the researchers corroborated those findings in children by conducting an unbiased analysis of blood host gene expression profiles, and also found that smoke exposure was associated with significant increased expression of inflammation pathways.

“Team science and systems biology were key to successfully conduct this study and integrate the different study components,” says Asuncion Mejias, MD, PhD, a pediatric infectious diseases specialist and principal investigator in the Center for Vaccines and Immunity in the Abigail Wexner Research Institute at Nationwide Children’s, who contributed to the study.

Drs. Kopp and Mejias and fellow investigators are now probing the effects of secondhand smoke on the cystic fibrosis transmembrane conductance regulator protein, which is either made incorrectly or not at all in people with CF. They are also looking at microbiome and mucosal immune responses, where bacteria reside, to determine if secondhand smoke exposure affects mucosal inflammation and local immune responses, and more. 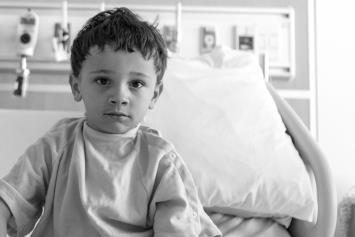