We know that nature has a powerful effect on healing. That’s why in 2012, we introduced our Animal Friends during the opening of the new hospital. The Eagle animal friend will join twenty-four different sculptures located on patient levels and around our campus that act as our ambassadors; surprising and delighting children and visitors.

All our animal friends share four things in common:

The Eagle animal friend is located in the hospital's Heritage Hall - an area that will honor the rich history of the hospital and our relationship with Nationwide and the Nationwide Foundation.  The Eagle has the perfect avocation as a member of the Nationwide Children's Hospital Care Team and will greet patients and visitors from its nest with its wings wrapped around two baby eaglets and one on the way. The butterflies on and around the nest will keep them company.

For a complete “field guide” to all of Nationwide Children’s Animal Friends, click here.

(From left to right) Chad, Erin and Bodie Harvey, Dr. Mark Galantowicz and Dawn LeCrone (Bodie's grandmother). Bodie, who is a patient at Nationwide Children's helped unveil our newest animal friend the Eagle! Bodie's Mom, Erin and his grandmother Dawn, are both Nationwide associates. 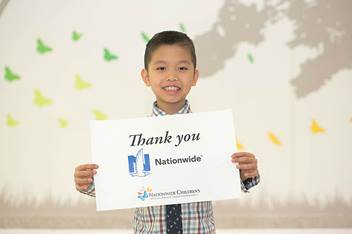