Congenital heart disease (CHD) is the most common birth defect. Infants with CHD have abnormal heart structure resulting in abnormal blood flow patterns. Approximately eight out of every 1,000 infants have a form of CHD. Some forms of CHD cause no, or very few, problems in the health, growth and development of the infant. In many cases, these forms of CHD do not require surgical repair or cardiac catheterization.

Critical CHD, however, can bring a significant risk of morbidity and mortality if not diagnosed in a timely manner. Failing to detect critical CHD while in the newborn nursery may lead to critical events, such as cardiogenic shock or death. Survivors who present late are at greater risk for neurologic injury and subsequent developmental delay.

Fortunately, a routine test exists that can help us identify most infants with critical CHD.

What is the Pulse Oximetry Test?

Pulse oximetry is a simple, non-invasive and painless test that is used to measure the percent of oxygen saturation of hemoglobin in the arterial blood and the pulse rate. The pulse-oximetry test was invented in the 1970s and is now widely used and accepted in clinical care. In fact, it is often considered a vital sign. Traditionally, pulse oximetry has been used to monitor an individual’s oxygen saturation during acute and chronic illness, as well as during procedures requiring general anesthesia or sedation.

Why is Pulse Oximetry Used to Screen for CHD?

A routine physical examination, as performed during the first 24 hours of life in most institutions, is only 50 percent effective in detecting CHD. The pulse-oximetry test can help identify infants with low levels of oxygen in their blood and may help diagnose critical CHD before an infant becomes sick.

The test has been recommended as a screening test for critical CHD by the:

Who Should Be Screened?

All infants should be screened.

When Should Screening Be Performed?

Where Should Screening Be Performed?

The pulse-oximetry test should be performed on the right hand and one foot.

What is a Normal Pulse Oximetry Reading for Infants?

A reading of 95 to 100 percent is normal in healthy infants. Infants with heart or lung problems may have lower readings. A low pulse-oximetry reading can also be present in newborns whose circulation is adjusting to life outside of the womb. 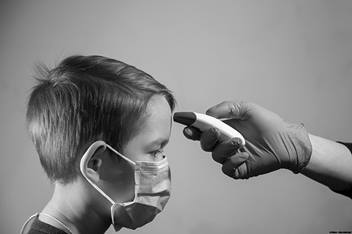 COVID-19 and Kawasaki Disease: What Parents Need to Know