Tetralogy of Fallot is a congenital heart defect that is made up of 4 problems and results in not enough blood flow to the lungs.

What Is Tetralogy of Fallot?

Tetralogy of Fallot is a congenital heart defect that is made up of 4 problems and results in not enough blood flow to the lungs:

In the normal heart, the heart is divided into four chambers, separating the blue (low-oxygen) blood on the right side of the heart from the red (with oxygen) blood on the left side of the heart. In TOF, this combination of heart defects leads to reduced blood flow to the lungs as well as mixing of red and blue blood across a “hole in the heart” or VSD. This allows blue blood to pump out to the body, resulting in low blood oxygen levels. This is seen as blueness of the skin, lips, fingernails and tongue (often called a “blue baby”) and may also result in poor feeding, growth problems, and activity intolerance.

Illustration of Tetralogy of Fallot

Blue (low-oxygen) blood returns from the body and should be pumped from the right ventricle (RV) to the pulmonary arteries (PAs) and out to the lungs.

Red (oxygenated) blood returns from the lungs and is pumped from the left ventricle (LV) to the aorta and out to the body.

In Tetralogy of Fallot, there is a narrowing of the pulmonary arteries (can be below, at, or above the valve) as well as a ventricular septal defect (VSD). Blue arrows show this narrowing and the VSD, which allows mixing of red and blue blood.

The staff of the Adolescent and Adult Congenital Heart Disease Program at Nationwide Children's Hospital are experts in caring for patients with Tetralogy of Fallot (TOF) and other congenital heart diseases. Our program is comprised of experts with an understanding of congenital heart disease as well as patient care after surgical or specialized transcatheter therapy. A full range of diagnostic and treatment capabilities are available to our patients.

Treatment for Tetralogy of Fallot

Nationwide Children's Hospital has a expert team of cardiologists dedicated to treating patients of all ages with Tetralogy of Fallot.

Tetralogy of Fallot is a heart defect made up of four different heart problems: ventricular septal defect, overriding aorta, pulmonary stenosis and right ventricular hypertrophy. These problems result in cyanotic, or blue, skin on babies because of a lack of oxygen.

Diagnosis of Tetralogy of Fallot

TOF is usually diagnosed in infancy or early childhood, however patients with mild abnormalities (“pink” Tets) may be diagnosed later, as adolescents or adults. Typically, because there is not enough blood flow to the lungs, patients often require surgery early in life. Findings on the history and physical examination prompt expert cardiac evaluation and guide the workup. Tetrology of Fallot is usually diagnosed by echocardiogram (ultrasound pictures of the heart). An electrocardiogram (EKG) assesses the electrical activity of the heart. Cardiac catheterization angiography (cardiac cath), cardiac MRI (magnetic resonance imaging), and cardiac CT (computerized tomography scan) also identify the typical findings in TOF.

These imaging modalities are also useful in identifying long-term complications in TOF patients.

Cardiac MRI: Provides the most accurate measure of right ventricular size and function. Cardiac CT is helpful in patients who are not candidates for MRI due to the presence of pacemaker or internal cardioverter-defibrillator (ICD), claustrophobia or other reasons.

Ambulatory ECG monitoring: This is helpful in addressing the heart for conduction system abnormalities or arrhythmias. Holter monitoring records each heart beat in a 24 hour period. A 30-day event monitor is worn to help determine the cardiac rhythm during symptoms such as skipped beats, palpitations, heart racing, dizziness, or fainting.

Electrophysiologic study (EPS): An invasive test similar to a heart catheterization and evaluates the electrical system of the heart. The test is able to detect abnormal rhythms from either the upper chambers (atria) or lower chambers (ventricles). In some instances, the EP physician may decide to “map” the rhythm problem to find out where it is coming from in the heart. By doing so, the abnormal heart rhythm may be “ablated” or short circuited to prevent it from recurring. This may be done in the EP lab or the operating room, if open heart surgery is pending. The EP lab is the also the place where an ICD or intracardiac defibrillator or pacemaker will be placed. In many instances, the cardiac catheterization and the EPS will be done at the same time. 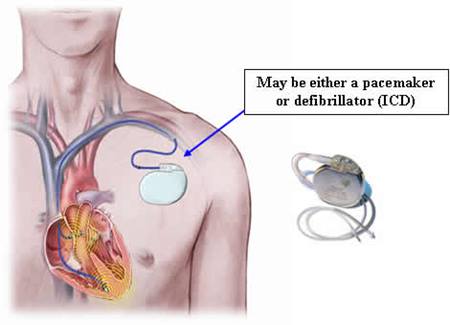 Treatment of Tetralogy of Fallot

Surgeries are performed to supply more blood to the lungs and are called “palliations”, because they are not typically considered to be a long-term repair. The placement of shunts bypasses the pulmonary narrowing, however the pulmonary stenosis and VSD remain until completely repaired. The use of early shunt procedures provided blood to the lungs by using the higher pressure arterial supply (aorta) to the lower pressure lung arteries. Over time, increased pressure and blood flow to the lungs can result in pulmonary vascular disease and high blood pressure in the lungs (pulmonary hypertension). Many adults underwent Blalock-Taussig, Waterston or Potts shunt palliations in childhood.

“Complete” repair consists of closure of the VSD, correction of aortic override, and alleviation of right ventricular outflow tract (RVOT) obstruction. The RVOT refers to the area where blood flows from the right ventricle and out to the main pulmonary artery.  If there is narrowing or obstruction of the RVOT, it is resected. Often times, the valve was “torn or stretched open” or removed and a patch was placed across the RVOT or across the valve to alleviate the narrowed area. Patients were often left with a non-functioning pulmonary valve which leaks. 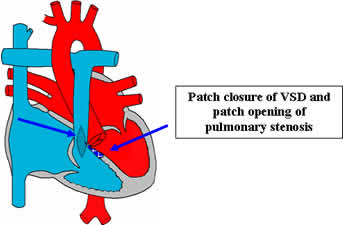 Complications from Tetralogy of Fallot

Previously a routine technique, making a large incision in the right ventricle (ventriculotomy) and using a large transannular patch to repair TOF, have been abandoned. Extensive incisions, patches, and suturing (stitches) lead to the formation of scar tissue in the right ventricle, which is associated with weakness of heart muscle and heart conduction (electrical) system issues. Currently, the goal of surgical techniques is to minimize the extent incision (or cutting) of right ventricle and to maintain the integrity and competence of the pulmonary valve.

Despite surgical procedures to augment blood flow to the lungs as well as complete repair operation, some patients may develop long-term complications:

Right Ventricular Hypertrophy (RVH)
Obstruction (RVOT or pulmonary stenosis) forces the right ventricle to work harder to pump blood through the narrowed area. Over time, the muscle of the right ventricle may become thick, bulky, and not pump efficiently.

Right Ventricular Enlargement (RVE)
More commonly, RVE results from chronic leaking of blood from the pulmonary valve, back into the right ventricle. This extra blood volume causes enlargement (stretching) of the right ventricle, resulting in a boggy ventricle that does not pump efficiently. This may lead to heart failure, abnormal heart rhythms, and the tricuspid valve leaflets may lose their ability to close properly, resulting in tricuspid valve leaking as well.

Right Ventricular Failure
Chronic high-pressure and volume loading on the right ventricle eventually interferes with its ability to pump adequately. Further deterioration in pump function results in right ventricular failure. Symptoms associated with right ventricular failure include exercise intolerance, visible pulsations in the jugular veins, enlargement of the liver (sometimes associated with a feeling full after a small amount of food intake), weight gain due to fluid accumulation, and swelling in the hands, feet or legs.

Aortic Regurgitation and Aortic Dilatation
Aortic valve regurgitation (leaking) occurs due to damage of the aortic valve with VSD repair. The aortic tissue is thought to be abnormal in patients with TOF and may account for aortic enlargement/aneurysm.

Branch Pulmonary Artery Stenosis
Either as part of TOF anatomy from birth but usually as a result of surgical shunts that were placed, the right and left pulmonary arteries may become narrowed reducing the blood flow to the right or left lung. This also puts excessive pressure on the right ventricle.

Tetralogy of Fallot is a heart defect made up of four different heart problems: ventricular septal defect, overriding aorta, pulmonary stenosis and right ventricular hypertrophy. These problems result in cyanotic, or blue, skin on babies because of a lack of oxygen.