Spinal muscular atrophy (SMA) is the most common form of motor neuron disease. Motor neurons control the voluntary muscles that are used for activities such as crawling, walking, head and neck control, and swallowing. SMA primarily affects infants and children, and it occurs in one in 10,000 births. This makes SMA the most common fatal genetic disease of infants, and the second most common (after cystic fibrosis) autosomal recessive genetic disorder. The carrier rate for this disorder in individuals of European Caucasian descent is one in 40. Thus, it is estimated that there are seven million carriers in the United States.

Neurology & Neurosurgery is ranked by US News & World Report.

Urgent referrals, which include possible type 1 SMA patients or potential SMA patients identified via NBS, must include a brief clinical summary, genetic testing results, all demographics and all pertinent medical records. Referrals should be sent directly to the NM office and marked Urgent.

Landmark Approval for a Life-Changing Treatment

For almost two years, Nationwide Children’s has reported on the astonishing results of a treatment developed here for a devastating genetic condition. Children with this condition, called spinal muscular atrophy type 1 (SMA1), usually do not have the ability to hold their heads up, to roll over or to sit on their own. Most of these children die before their second birthdays.

The therapy, possible because of decades of research at Nationwide Children’s and The Ohio State University, has allowed a few of these children not only to live, but to crawl, walk and run. Jerry Mendell, MD, a principal investigator in the Center for Gene Therapy in the Abigail Wexner Research Institute, conducted the first experimental trial in children here. The readers of Science  magazine named the results of the trial as the most important scientific breakthrough of 2017.

The FDA issued an approval for the gene therapy that has already changed the lives of patients at Nationwide Children’s, laying the groundwork for it to change the lives of children with SMA all over the country. The therapy is called Zolgensma, and a gene therapy company we helped create, AveXis, Inc. (now part of Novartis), is bringing it to market. 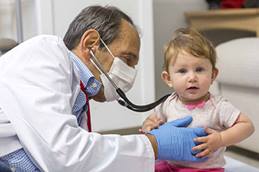 When Milan and Elena found out they were pregnant with their second child, Evelyn, they prayed for a healthy baby. Unfortunately, that was not the case. Evelyn tested positive for SMA Type 1. Soon after, Evelyn’s family found out about the clinical trial going on at Nationwide Children’s Hospital. Today, Evelyn is a healthy, normal child. Something we never before have been able to say about a child with SMA Type 1. Now, her parents are thinking long-term and planning for college.

Inside the Center for Gene Therapy at Nationwide Children’s Hospital is where Dr. Mendell has spent nearly 50 years advancing science for neuromuscular disease through clinical trials. It’s where new treatments and potential life-saving cures are being discovered for families who are racing against the clock for options.

The SMA Clinic is a joint program between Nationwide Children’s Hospital and The Ohio State University Wexner Medical Center, providing comprehensive, multidisciplinary care for patients from across the United States. Specialized services include the following disciplines:

A one-time intravenous infusion of the high dose of gene therapy extended the survival of patients with spinal muscular atrophy type 1 (SMA1), according to a recent study led by Dr. Jerry Mendell and published in the New England Journal of Medicine. Information for parents of children with SMA1 who want to learn more about study participation can visit: studysmanow.com

How does Gene Therapy Work?

The Spinal Muscular Atrophy Clinic, along with the Center for Gene Therapy in The Research Institute at Nationwide Children’s Hospital and the OSU Division of Neuromuscular Medicine, is actively involved in clinical trials for children and adults with SMA. Our Clinical Research Unit is the only center in the world that has carried out clinical trials in all three major forms of the disease. Several trials are ongoing and additional trials are in the planning stages. To that end, we participate in the Families of SMA-sponsored “Project Cure SMA” an international consortium of medical centers performing clinical trials in SMA.

The translational research program in many ways forms the “soul” of the SMA Clinic. The overarching goal of the program is to use the knowledge gained from research and pre-clinical trials in animals to develop effective therapies for patients with SMA. The SMA Translational Research Program is a joint venture of The Research Institute at Nationwide Children’s Hospital, OSU’s Wexner Medical Center, selected academic medical centers, and pharmaceutical and biotechnology companies.

The SMA Clinic is fully affiliated with the International Coordinating Committee (ICC) for SMA that links the multiple SMA lay and professional organizations into a unified and cohesive unit to pool information and projects related to SMA.