Nationwide Children’s Hospital is expanding their critical care transport services by establishing a fully dedicated helicopter for neonatal and pediatric transports. The state-of-the-art EC145 helicopter, named Monarch 1, features the best in size, performance and technology allowing for the safe transportation of critically ill patients. With approximately 30 percent of all neonatal admissions to Nationwide Children’s requiring a drive of more than an hour, the addition of this aircraft allows the hospital’s dedicated neonatal and pediatric transport team to initiate specialized critical care services more quickly. The helicopter will primarily transport neonates, but will also be available for hospital transports of pediatric patients.

The EC145 helicopter was specifically selected to fit the needs of the neonatal and pediatric patient population with special consideration for critically ill neonates. Based at The Ohio State University Airport in Columbus, Ohio, the aircraft is equipped with state-of-the-art critical care equipment, IFR technology allowing the aircraft to fly in low visibility and a combination of nitric oxide therapies and High Frequency Ventilation (HFV) for patients in need of respiratory care while in transport. Monarch 1 is the only Ohio transport helicopter that offers this kind of respiratory care for neonatal patients. This aircraft also offers a large cabin with the potential to allow a parent or guardian to ride on-board during the transport of their child. The large cabin also accommodates additional expert staff members to ensure patient safety while in flight. In addition to the cabin size, the overall aircraft is a larger model allowing the team to travel a farther distance at higher speeds. The helicopter will focus on transfers between hospitals and will not land at accident scenes as the current trauma system is extremely effective in first response.

“Minutes count when it comes to transporting critically ill infants,” said Edward Shepherd, MD, section chief of Neonatology at Nationwide Children’s Hospital. “The addition of this EC145 helicopter allows us to better serve our patient families while increasing the access to the neonatal and pediatric specialty care.”

“MedFlight is honored to partner with Nationwide Children's Hospital, as it has for decades, to provide high quality lifesaving care to infants and children,” said Thomas Allenstein, chief clinical officer at MedFlight. “Our partnership continues to grow as we join resources to support their new helicopter, crew and enhanced mission. Nationwide Children's continues to be one of the nation's best neonatal and pediatric air and ground medical transportation services.”

The Transport Program at Nationwide Children’s Hospital provides 24 hour neonatal and pediatric critical care transport services via mobile ICU, helicopter and jet aircraft to more than 1,800 patients each year, with more than half of those being newborns. The award-winning team is one of the few in the country capable of transporting neonates on nitric oxide therapy and high-frequency oscillation at the same time. The team is comprised of 68 RN’s, respiratory therapists and transport technicians (all EMT-P certified), and EMT-drivers with an average of 14 years of critical care experience. The Transport Program was recently awarded the 2011 National Award of Excellence from the Association of Air Medical Services (AAMS) and is one of two children’s hospitals in Ohio to receive the Commission on Accreditation of Medical Transport Systems (CAMTS) Accreditation. Our teams work closely with our medical directors and medical control physicians, and all medical care is driven by a combination of medical director approved protocols and guidelines, and on-line medical control via telephone during the transport process. The transport program provides critical care inter-facility transportation, 24-hours a day 7-days a week. The team provides transportation combined with a high level of care to critically ill patients from referring hospitals to Nationwide Children’s Hospital to receive specialty care. On occasion the team provides “reverse” transportation to referring hospitals after receiving care at Nationwide Children’s Hospital. 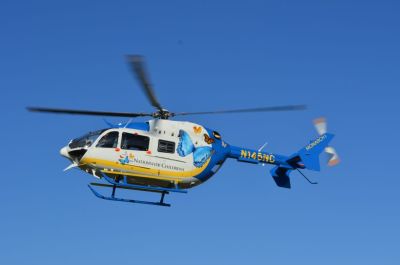