Dr. Mendell joined the Research Institute at Nationwide Children’s fulltime in 2004, recruited by Philip Johnson, the Head of the Center for Gene Therapy at that time. Shortly after, leadership of the Center changed and provided the opportunity to build and establish a program in Clinical Translation with emphasis on neuromuscular disease. At Nationwide Children’s, he holds academic positions as Professor of Pediatrics and Neurology and holds the Curran-Peters Chair of Pediatric Research.

He is a clinician scientist with decades of experience. A career emphasis began with training in neuromuscular disease at the National Institutes of Health, directing laboratory projects that could be carried to the bedside. He was recruited to Columbus to direct the Neuromuscular Center at Ohio State. His life’s work has emphasized clinical translation. He has published more than 370 articles with a focus on neuromuscular disease and authored books on muscle disease, peripheral nerve disorders, and most recently, gene therapy for muscle disease. He was the principal investigator on the prednisone clinical trial in DMD in 1989 that has profoundly influenced clinical care. He was the PI on the exon skipping trial using eteplirsen, now FDA approved for clinical use in 2016. He was the PI on the first gene therapy trials for DMD and LGMD and was the PI on the SMA gene therapy trial that was FDA approved for systemic delivery for infants with SMA type 1 in 2017. The results of the first systemic gene therapy trial for DMD is now moving to Phase 3. Results from the Phase 1/2 micro-dystrophin trial will be published in June 2020.

The Mendell Lab is devoted to the development of potential treatments for neuromuscular diseases including Duchenne muscular dystrophy (DMD) and limb-girdle muscular dystrophy (LGMD). DMD causes progressive muscle weakness that usually confines patients to a wheelchair in their early teens. Limb-girdle muscular dystrophies are a group of at least 13 diseases classified by their disease causing genes. It causes loss of muscle mass and strength in voluntary muscles, mainly those around the hips and shoulders. These diseases are caused by genetic defects that lead to missing or non-functional proteins. This makes gene replacement or gene therapy a good treatment option for these diseases. Our major research goal is successful gene therapy, by replacing genes for DMD and LGMD using adeno-associated virus (AAV) vectors to carry a copy of the corrected gene to the muscle cells. In some instances such as the dystrophin gene (the largest gene identified) “mini” and “micro” genes must be used. This can be done by direct injection into muscle (IM) or by way of the blood stream (vascular delivery). Muscular dystrophy can also be treated with follistatin by way of IM injection with adeno-associated virus (AAV) vectors to carry the follistatin gene in IBM and BMD. It inhibits myostatin, promoting muscle growth and preventing deterioration of existing muscle. Another therapeutic approach is exon skipping, treating primarily DMD, using synthetic molecules that induce skipping or read-through of the damaged portion of the dystrophin gene. This is a mutation-specific treatment with each molecule designed to skip a certain exon(s). This leads to restoration of the reading frame and production of an internally truncated partially functional dystrophin protein.In addition to developing potential treatments for neuromuscular diseases, the Mendell laboratory also concentrates on the diagnosis and characterization of neuromusclar diseases. The Mendell lab also serves as the diagnostic lab of muscle biopsies for the Anatomic Pathology Department of Nationwide Children’s Hospital. We are currently conducting a newborn screening study for DMD with The Research Institute at Nationwide Children's Hospital and Cincinnati Children's Hospital to identify possible cases in young males in the state of Ohio. The lab also has the resources of the United Dystrophinopathy Project (UDP) available for genetic screening and characterization of dystrophinopathies that cause DMD. The UDP directly sequences the coding and regulatory regions of the dystrophin gene, leading to faster and more specific characterization of mutations of many dystrophinopathy patients. The Mendell lab also has resources here at Nationwide Children's Hospital to identify and sequence other genes that cause muscular dystrophies. 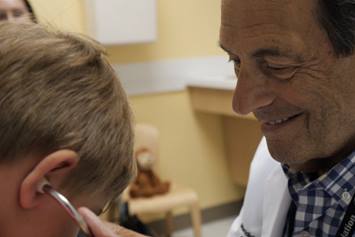 Inside the Center for Gene Therapy at Nationwide Children’s Hospital is where Dr. Mendell has spent nearly 50 years advancing science for neuromuscular disease through clinical trials. It’s where new treatments and potential life-saving cures are being discovered for families who are racing against the clock for options.