A new study conducted by the Center for Injury Research and Policy of the Research Institute at Nationwide Children’s Hospital and the Central Ohio Poison Center found that exposure to laundry detergent packets is more dangerous to young children than exposure to other types of laundry and dishwasher detergent.

In an effort to reduce unintentional exposures to the contents of laundry detergent packets, ASTM published a voluntary Standard Safety Specification for Liquid Laundry Packets in 2015, but some experts feel it did not go far enough.

“This voluntary standard is a good first step, but it needs to be strengthened,” said Gary Smith, MD, DrPH, the senior author of the study and director of the Center for Injury Research and Policy at Nationwide Children’s Hospital. “Unless this unacceptably high number of exposures declines dramatically, manufacturers need to continue to find ways to make this product and its packaging safer for children.”

Experts recommend that families with children younger than 6 years old use traditional detergent instead of packets. “Many families don’t realize how toxic these highly concentrated laundry detergent packets are,” says Marcel J. Casavant, MD a co-author of the study, chief of toxicology at Nationwide Children’s Hospital and medical director of the Central Ohio Poison Center. “Use traditional laundry detergent when you have young kids in your home. It isn’t worth the risk when there is a safer and effective alternative available.”

Parents and child caregivers can help children stay safer by following these tips:

Data for this study were obtained from the National Poison Data System, which is maintained by the American Association of Poison Control Centers (AAPCC). The AAPCC receives data on calls to participating poison control centers (PCCs) that serve the US and its territories. PCCs receive phone calls through the Poison Help Line and document information about the product, route of exposure, individual exposed, exposure scenario, and other data.

The Center for Injury Research and Policy (CIRP) of The Research Institute at Nationwide Children’s Hospital works globally to reduce injury-related pediatric death and disabilities. With innovative research at its core, CIRP works to continually improve the scientific understanding of the epidemiology, biomechanics, prevention, acute treatment and rehabilitation of injuries. CIRP serves as a pioneer by translating cutting edge injury research into education, policy, and advances in clinical care. For related injury prevention materials or to learn more about CIRP, visit www.injurycenter.org.

Click here to watch and learn more about laundry detergent packet dangers and how you can prevent them. 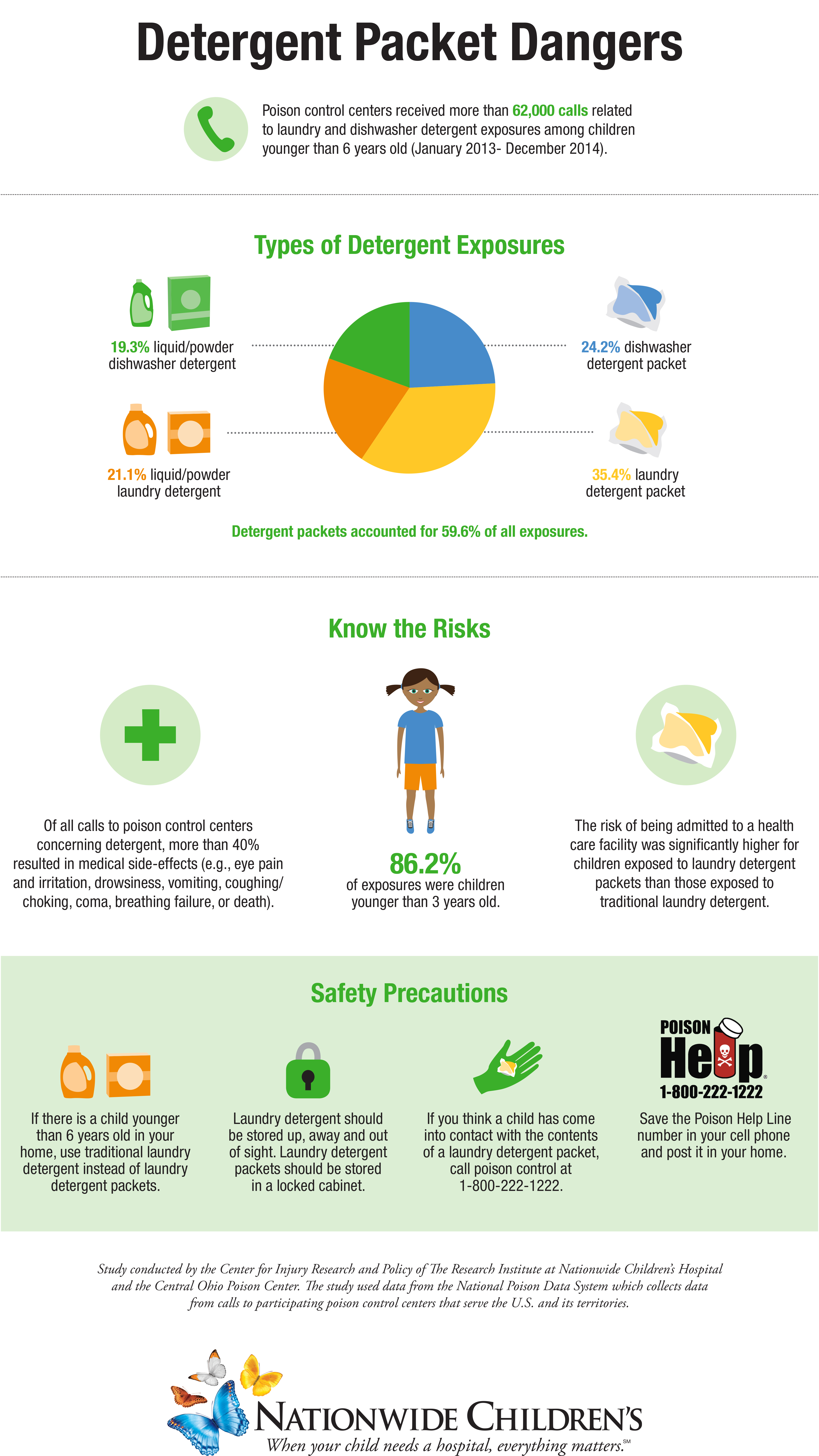