A new study by researchers in the Center for Injury Research and Policy of The Research Institute at Nationwide Children’s Hospital examined injuries to children related to amusement rides, which included rides at amusement parks (fixed-site rides), rides at fairs and festivals (mobile rides) and rides found at local malls, stores, restaurants or arcades (mall rides).
Researchers found that from 1990 to 2010, 92,885 children under the age of 18 years were treated in United States emergency departments for amusement ride-related injuries for an average of 4,423 injuries each year. More than 70 percent of the injuries occurred during the warm summer months of May through September – equating to more than 20 injuries a day during these months.

The study, available online May 1, 2013 and in the May print issue of Clinical Pediatrics, found that the head and neck region was the most frequently injured (28 percent), followed by the arms (24 percent), face (18 percent) and legs (17 percent). Soft tissue injuries (29 percent) were the most common injury type followed by strains and sprains (21 percent), cuts (20 percent) and broken bones (10 percent). The overall percentage of injuries requiring hospitalization or observation was low, suggesting that serious injuries are relatively rare. However, during the summer months, May – September, there is an amusement ride-related injury that is serious enough to require hospitalization once every three days on average.

Injuries were most likely to be sustained as the result of a fall (32 percent), or by either hitting a part of a body on a ride or being hit by something while riding (18 percent). Nearly one-third (33 percent) of injuries occurred on a fixed-site ride, followed by mobile rides (29 percent) and “mall” rides (12 percent).

“Although the U.S. Consumer Product Safety Commission has jurisdiction over mobile rides, regulation of fixed-site rides is currently left to state or local governments leading to a fragmented system,” said the study’s senior author Gary Smith, MD, DrPH, director of the Center for Injury Research and Policy of Nationwide Children’s Hospital. “A coordinated national system would help us prevent amusement ride-related injuries through better injury surveillance and more consistent enforcement of standards.”

The study also found that injuries associated with “mall rides” differed from fixed-site and mobile rides. They were more likely to be head/neck or face injuries, concussions/closed head injuries or cuts than were injuries associated with fixed site or mobile rides. Almost three-fourths of the “mall ride” injuries occurred when a child fell in, on, off or against the ride. These types of rides may be placed over hard surfaces and may not have child restraints, which contributes to the injury risk.

“Injuries from smaller amusement rides located in malls, stores, restaurants and arcades are typically given less attention by legal and public health professionals than injuries from larger amusement park rides, yet our study showed that in the U.S. a child is treated in an emergency department, on average, every day for an injury from an amusement ride located in a mall, store, restaurant or arcade,” said Dr. Smith, who is also a professor of pediatrics at The Ohio State University College of Medicine. “We need to raise awareness of this issue and determine the best way to prevent injuries from these types of rides.”

Some tips for keeping safe on amusement rides include:

This is the first study to describe national rates of pediatric injury involving amusement rides treated in U.S. emergency departments. Data for this study were obtained from the National Electronic Injury Surveillance System (NEISS), which is operated by the U.S. Consumer Product Safety Commission. The NEISS provides information on consumer product-related and sports and recreation-related injuries treated in hospital emergency departments across the country.

The Center for Injury Research and Policy (CIRP) of The Research Institute at Nationwide Children’s Hospital works globally to reduce injury-related pediatric deaths and disabilities. With innovative research at its core, CIRP works to continually improve the scientific understanding of the epidemiology, biomechanics, prevention, acute treatment and rehabilitation of injuries. CIRP serves as a pioneer by translating cutting edge injury research into education, policy, and advances in clinical care. For related injury prevention materials or to learn more about CIRP, visit http://www.injurycenter.org.

Watch experts from Nationwide Children's talk about amusement ride-related injuries and how parents can avoid them. 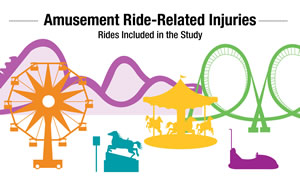 View an infographic about amusement ride-related injuries and learn more about the study's findings.

Amusement rides send 20 kids a day during the summer to emergency rooms.

View and download a high resolution photo of amusement rides.