Many children with severe allergies carry injectable epinephrine (EpiPens) – syringes filled with epinephrine to delay an allergic reaction – but the EpiPens sometimes require the help of an adult to dispense. School nurses are often the only school officials authorized to handle medications, leaving the educators who are with the children most of the day untrained. According to doctors at Nationwide Children’s Hospital, this lack of training is exactly what becomes most dangerous for children with severe allergies.

“In this country, there are about 100 to 150 people every year that die from a food allergy reaction,” said Daniel Scherzer, MD, Emergency Medicine physician at Nationwide Children’s Hospital. “Approximately half of those people actually had epinephrine in the vicinity and was available to them. The medication just wasn’t used or it wasn’t used in time.”

Dr. Scherzer and his team at Nationwide Children’s have recently developed a method to not only assess school staff’s knowledge of EpiPen use, but to also teach participants how and when to use them.

“With approximately 2.5 million EpiPens out there, it struck me that there are probably more EpiPens than there are people who know how to use them,” said Dr. Scherzer, also a faculty member at The Ohio State University College of Medicine. “So, we developed a method to assess how familiar people are with them and a way to teach them how and when to use them.”

Dr. Scherzer has developed a workshop that begins with figuring out how much the participants know about EpiPens using a written examination. They then provide an opportunity for the school staff to apply their skills. They found that while medically trained school nurses did fairly well with the EpiPens, other staff members struggle the most.

There were three areas where people had difficulty with using epinephrine:

After the assessment, the team conducts a workshop to teach participants the correct way to use the medicine, by both demonstrating with an actual device and allowing the participants to practice.

“After that intervention, we notice a measurable improvement in people’s ability to use an EpiPen,” said Dr. Scherzer. “A little bit of hands-on training and discussion seems to go a long way.”

With the number of food allergy cases increasing, many parents have begun to push for school staff to take responsibility for children’s reactions while under school care.

“It’s an area where parents have to rely on someone else to do the right thing,” said Dr. Scherzer.

Dr. Scherzer and his team plans to expand their program to include other professionals that work closely with children, and to develop a cadre of trainers to train others. He hopes that this education will better prepare schools to deal with severe allergic reactions.

To learn how to use an EpiPen, visit NationwideChildrens.org/EpiPen. 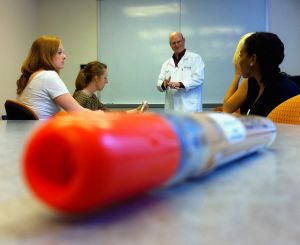 Emergency Medicine physician, Dr. Daniel Scherzer and his team at Nationwide Children’s are educating school staff on how and when to use an epinephrine injector. 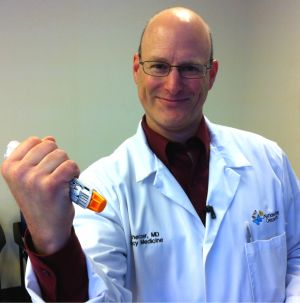 Every year in the US, more than 100 people die from a food allergy. Half of these people actually had epinephrine in the vicinity, but the medication wasn’t used or it wasn’t used in time.