John Martin (Columbus, 43224) receives blood transfusions every four weeks and has done so since he was 4 years old. The 21-year-old continually smiles warmly and hopes to be healthy enough to land a job, and also coach basketball, in the future.

John’s brother, Dustin, 18 (also of Columbus, 43224), isn’t healthy enough to receive regular transfusions so he lives with pain. “I just do my regular stuff and have gotten used to the aches and pain,” Dustin says.

Both Martins have sickle cell anemia. Despite the debilitating illness, John and Dustin graduated from Beechcroft High School in Columbus and plan to attend Columbus State College. John hopes to line up some job interviews in the near future. Dustin likes looking sharp. His mother, Marion Martin, calls Dustin “Mr. Fashion.”

Now through the vision of former Buckeye football player and current Pittsburgh Steeler Will Allen and the Will Allen Foundation, John will have a custom high-end suit for his interviews and Dustin will look sharp whenever he wants.

The Will Allen Foundation, Astor & Black Custom Clothiers and Nationwide Children’s Hospital are partnering to bring custom pre-owned suits to young men in need. Astor and Black, through donations from professional athletes in the NFL, NBA, MLB and NHL, is providing the suits for the Will Allen Foundation program. Each recipient will receive a custom-made suit, originally designed and made for one of a handful of professional athletes.

“If a suit can help these young men further their dreams or better their positions in life, or removes a barrier that could prevent them from achieving their personal best, I’m all for it,” says Allen. “Each recipient will have the suit best suited for them, custom tailored to fit their specific sizing needs.”

In 2004, David Schottenstein founded Astor & Black Custom Clothiers at the age of 21 and started selling suits out of the trunk of his car. Now, with over 70 representatives nationwide, Astor & Black has more than 800 professional athletes as customers. The quality of the custom clothing has won a loyal and prestigious clientele.

Sickle cell anemia is carried by more than 70,000 Americans. It is caused by an abnormal type of hemoglobin, called hemoglobin S. Hemoglobin is a protein inside red blood cells that carries oxygen. Hemoglobin S changes the shape of red blood cells, especially when the cells are exposed to low oxygen levels. The red blood cells become shaped like crescents or sickles. The fragile, sickle-shaped cells deliver less oxygen to the body's tissues. They can also get stuck more easily in small blood vessels, and break into pieces that interrupt healthy blood flow.

Working with Nationwide Children’s to identify patients in need, the Will Allen Foundation hopes to provide suits regularly to deserving patients like the Martins.

Dustin and John are proud and happy with their new suits. “I might wear mine all the time,” said Dustin. “I just want to look different and my suit makes me feel like I am different.” 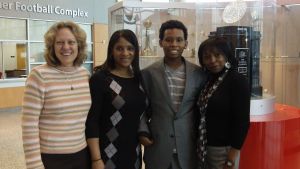