Depression is not a character weakness. And it’s not just a passing phase. It’s a real illness that can be diagnosed and treated effectively.

Depression is a common but serious form of childhood mental disorder. It is more severe than normal sadness. It can interfere with a child's energy, concentration, sleep, and appetite. And it can go on for weeks, months, or even longer.

Clinical depression in children can appear in several different ways:

Major depressive disorder, where children have feelings of overwhelming sadness or irritability, worthlessness, and guilt. They lose interest in activities that once gave them pleasure. They are frequently bored. They may complain of physical problems, such as stomach aches or headaches. Their sleep, appetite, and/or concentration might change. They may engage in self-harm or think about suicide, death, or dying.

Disruptive mood dysregulation disorder, where children are mostly irritable for long stretches of time and frequently have major tantrums, out of the ordinary for their age.

Up to three percent of children and up to eight percent of adolescents suffer from depression. Fewer than half of those afflicted receive the treatment they need.

What Symptoms Should Parents Look for?

The symptoms of depression in children can be subtle at first or they may appear suddenly. It can be hard to recognize that your child might have depression.

Signs and symptoms of depression in children include:

Any of these signs can be found on occasion in children who are not depressed. When seen together, nearly every day, for several weeks or longer, they are red flags for depression.

Family members and friends should take all suicide threats or attempts seriously. Children and teens who are depressed are at greater risk for completed suicide.

Adolescents and teens who are thinking about suicide might:

Suicide among teens often happens after a stressful life event. It could be triggered by problems at school, or a breakup with a boyfriend or girlfriend. Or by the death of a loved one, a divorce, or even a major family conflict.

What Causes Depression in Children?

Doctors do not know exactly what causes depression. Physical disorders, life experiences, and heredity can contribute.

Children whose parents have depression are at a greater risk of being depressed. Risk increases if multiple generations (e.g., grandparents and parents) have depression. A family history of bipolar disorder is another significant risk factor.

A child’s risk for becoming depressed may increase with stress. Behavioral problems and other mental disorders – for example, conduct, attention-deficit, learning, anxiety, and substance use disorders — frequently co-occur with depression.

How is Depression Diagnosed?

To diagnose depression, doctors rely on several sources of information, including an interview with the child and information from parents and teachers. Sometimes doctors use questionnaires to help distinguish depression from a normal reaction to an unhappy situation.

A diagnostic evaluation for depression will normally include:

How is Depression Treated?

Youth with mild to moderate depression should receive evidence-based psychotherapy. Those with moderate to severe depression will likely do best with a combination of medication and evidence-based psychotherapy. It is important for the family and child to learn about depression and its treatment so that symptoms can be effectively managed. Additional interventions that might further benefit depressed youth include complementary health approaches such as nutritional supplements, a healthy diet, exercise, meditation and/or prayer. Youth with severe depression that hasn't gotten better after several medication trials may benefit from electroconvulsive therapy (ECT).

When Should you Seek Help for Children with Depression?

Depression can get better. But without the right attention and care, it can continue. Or get worse.

If you think that your child may have symptoms of depression, seek professional help. The best time to start is now. Early intervention is critical. And if the signs of depression are there, waiting for your child to grow out of these behaviors is probably wishful thinking.

If you’re not sure where to start, contact your family physician or your child’s pediatrician. The doctor will probably do a complete physical exam to make sure there isn’t another heath condition that is causing depression-like symptoms.

If the doctor thinks your child has depression, he or she should be able to refer you to a mental health specialist for evaluation and treatment. 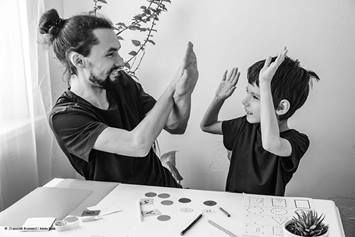 Screening for Depression: It May Not Be Mood Swings

Most parents expect that their teens may have mood swings, but sometimes those feelings of sadness can last longer and be more severe. Adolescent depression is common. Learn more about how pediatricians are screening for adolescent depression.

Suicide is the second leading cause of death in 10- to 19-year-olds. Little research exists on the rate of Black youth suicide specifically, but we do know it is on the rise.