The skull is formed by multiple different bones.  The junctions between the bones are called sutures.  Craniosynostosis occurs when one or more of the sutures closes early.  Early suture closure can cause the skull to grow in an unusual shape.  Sometimes, early suture closure can also restrict overall skull growth which may be harmful to the brain inside which is trying to grow.

Left untreated, craniosynostosis can result in further cranial deformity and potentially an overall restriction in head growth, with secondary increased intracranial pressure. It can also lead to psychosocial issues as the child interacts with peers during development.

How Common is Craniosynostosis?

What are the Different Types of Craniosynostosis? 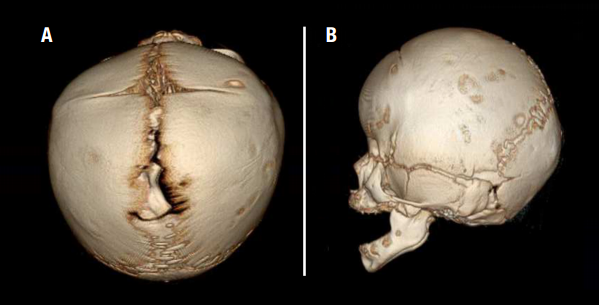 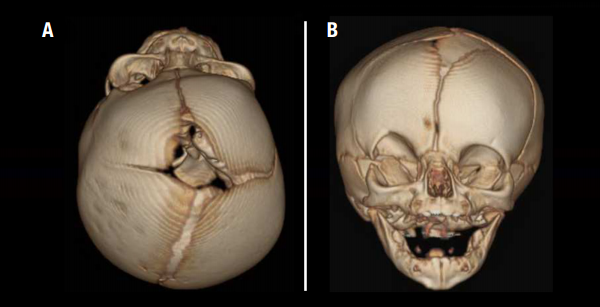 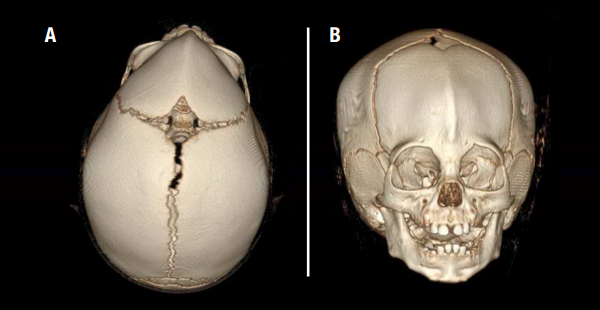 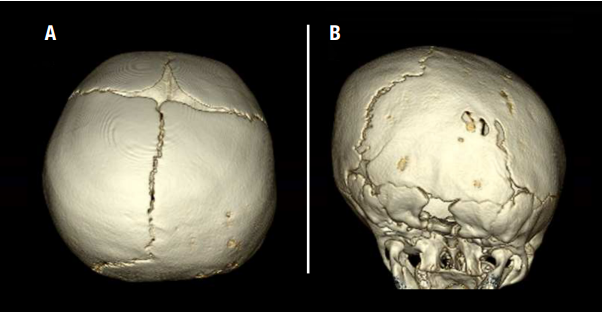 The Center for Complex Craniofacial Disorders expertly cares for children with craniosynostosis.

What are the Signs and Symptoms of Craniosynostosis?

The most apparent sign of craniosynostosis is typically an abnormally shaped head.  The soft spot may be open or closed.  Less common is a restriction of head growth with the measurements “falling off” the pediatrician’s growth curves.  This can lead to build-up of pressure inside the skull.  Signs of high pressure may include:

If my Baby has an Abnormally Shaped Head, Does he or she Have Craniosynostosis?

Most of the time, a misshapen head is simply Positional Plagiocephaly, which is not known to affect brain growth or development and can be corrected without surgery.  This head shape deformation, typically of the back of the head, is caused by repeated pressure to the same area.  It usually develops when a child prefers to lay his or her head on the same spot.  Most often, the shape of a baby’s head can determine if the baby has positional plagiocephaly or the more serious condition of craniosynostosis.

Hear stories from patients who were diagnoses with craniosynostosis and were helped by the experts at Nationwide Children's.

Not ready to request an appointment?

Our team will be happy to connect you with a Nationwide Children's expert.

"You never envision your child on the operating table. But, at the end of the day, we did what was right. We had a great outcome and for that we'll forever be grateful to our care team," said Heather Lofy after her son, Tuck, had surgery to correct his craniosynostosis. Nationwide Children's Hospital is a high-volume center when treating craniosynostosis.

In most infants, the cause of craniosynostosis is unknown and the child is otherwise healthy. Sometimes the cause is familial or genetic - a change occurs in one or more genes to result in the condition. Syndromes that can show craniosynostosis include:

Request an Appointment or Get a Second Opinion

How is Craniosynostosis Diagnosed?

Sometimes, craniosynostosis can be diagnosed with an office examination alone.  Often, imaging will be used to more closely examine the cranial sutures and confirm the diagnosis.  Here at Nationwide Children’s we use a special CT scan that provides 3D views of the skull using an ultra-low radiation dose equal to that of only a few regular x-rays.

How is Craniosynostosis Treated?

Treating craniosynostosis usually involves surgery to unlock and bones and reshape the skull.  Historically, craniosynostosis has been treated using surgical methods that involve an incision from ear to ear and the removal, reshaping, and reattachment of affected bones.  Sometimes this is still the best option.  However, at Nationwide Children’s, advances in technology are allowing us to conduct more of these procedures in a minimally invasive manner.

With traditional surgery, the procedure lasts approximately four hours and is performed with a craniofacial plastic surgeon.  A blood transfusion is usually necessary. The child is typically observed overnight in the ICU and then an additional three days on the regular neurosurgical floor before discharge.  Typically, swelling develops around the eyes for the first 2-3 days, but that goes away before the patient is released from the hospital.

This procedure is performed around the age of six months.  Younger infants are very unlikely to experience increased pressure inside the skull before then.  Because the head is reshaped during the surgery itself, no further reshaping measures are required after the surgery.

This involves one or two small incisions and the removal of only the closed suture to unlock the bones.  The surgery lasts approximately one hour and rarely requires a blood transfusion.  After the surgery, the child is observed overnight on the regular neurosurgical floor, and is then discharged.  Usually there is no swelling around the eyes.  Minimally invasive surgery produces the most successful outcomes when performed on children before the age of six months.

With minimally invasive techniques, reshaping of the head occurs after surgery with the assistance of either a cranial molding helmet or implanted custom springs.

The cranial molding helmet has a hard outer shell with moldable foam on the inside.  The helmet is worn 23 hours per day until the child’s first birthday.  It does not press the skull into shape, but rather directs the growth of the skull into a more normal shape.  Because the helmet relies on the high rate of skull growth in the first year of life, helmet-assisted surgery is usually done between 10 to 14 weeks of age. The helmet requires no additional surgery, however frequent visits to an orthotist are required.  An orthotist is a healthcare professional who works under the direction of a child’s doctor to regularly check the helmet and the progress of head reshaping. 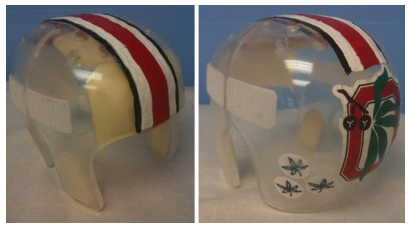 Stainless steel cranial expander springs are implanted after the closed suture is opened.  The springs are then removed three months later. The level of spring force is selected based on the patient’s age, bone thickness, and head shape severity.  Spring-assisted surgery is performed between the ages of three to six months.  The springs require a second surgery for removal but not the use of the helmet. 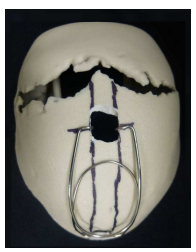 In very rare cases, when most or all of the sutures are closed, cranial distraction can be used to create more space inside of the skull.  After the bones are unlocked, distractors are implanted across the bone cut.  At a rate of 1 mm (less than 1/16th of an inch) per day, the sides are separated by turning a small screw. After 30 days, 3 cm (almost 1 and 1/4 of an inch) of new bone is created.  Three months later, the distractors are removed at a second surgery. 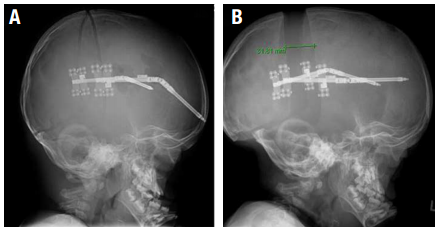 The Center for Complex Craniofacial Disorders and Neurosurgery expertly care for children with craniosynostosis. Our pediatric neurosurgeons are trained in treating children with craniosynostosis using some of the most advanced surgical techniques and equipment. Whenever possible, we conduct minimally invasive surgeries requiring only small incisions. Whether performing a traditional surgery or a minimally invasive procedure, our goal is to correct the shape of a child’s head and allow normal brain growth, all to deliver the best outcome for every child.

Drs. Gregory Pearson and Ibrahim Khansa visit the studio as we explore syndromic craniosynostosis. This condition impacts growth of a baby’s skull. We discuss the cause, symptoms, diagnosis, management, complications and long-term outlook for kids affected by this disorder. 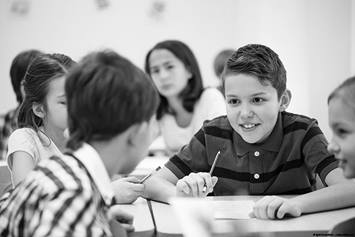 Craniofacial Differences: Teaching Kids How to Respond to Bullies

While teasing and bullying are concerns for all parents, children with craniofacial conditions may be especially vulnerable because of the visibility of their facial appearance differences and speech or learning. Learn about some practical strategies that parents can use to support their child’s confidence in social situations and help manage teasing and bullying. 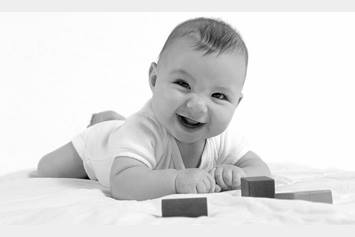 Baby’s Head Shape: Should You Be Concerned?

Bringing a baby home from the hospital can be a scary time for a parent as they navigate the first few months as an expanded family. The list of things to worry about as a child develops can seem endless, and baby’s head shape is a common item on that list. 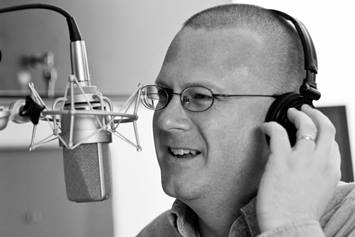 Dr Gregory Pearson stops by the PediaCast Studio to talk about abnormalities of the infant head. We consider microcephaly and macrocephaly, along with the diagnosis and management of positional plagiocephaly and craniosynostosis. Big complex names, yes; but also fairly common problems.