Skip to Content
As a nurse clinician in the comprehensive hemophilia treatment center at Nationwide Children's Hospital for nearly 30 years, Charmaine Biega, RN, has watched her patients endure hundreds of needle sticks for infusions and other procedures which can mean tears, frustration, wiggling and – in some cases – lifelong anxiety about the medical system and treatments that patients with hemophilia need to survive. But when she administered six-year-old Brody Bowman’s infusion this month in clinic, he was doing something she had never seen him do before a needle stick: having fun.
That is because several of her patients are enrolled in a pilot study which is testing a first of its kind virtual reality experience developed by the hemophilia team and design experts from Nationwide Children’s and students from The Ohio State University's Advanced Computing Center for the Arts and Design (ACCAD). The virtual reality game, Voxel Bay, was specifically created for her patient population to fully engage them in an immersive environment of penguins, pirates and hermit crabs during infusions and other procedures.
“Brody just started getting his treatments through IV on a regular basis and was having a really rough time,” said Charmaine. “But the first time he used the game in clinic, he was so completely engaged in the game when the IV was administered, he just barely flinched. The difference in how patients react during a procedure when they are playing these interactive games is remarkable.”
Charmaine uses a tablet to interact with the game and see exactly what her patients are seeing in their completely customized headset. Being able to have interaction between the nurse and patient was an important feature clinicians challenged the design team to create.
The headset was created by design experts at Nationwide Children’s, who developed a disposable, lightweight and child-friendly model that was thoughtfully meant to be safe, easy to use and, importantly for patients who need infusions, hands-free for the patients’ procedure.
The pilot study, funded by a grant from the National Hemophilia Foundation, is currently testing the feasibility of integrating the virtual reality technology into the clinic setting. The team is also collecting preliminary data on usability and likeability from parents, patients and nurses.
“I work with pediatric patients with bleeding disorders and know all too well the fears and anxiety that they and their families experience related to frequent needle sticks,” said Amy Dunn, MD, director of Hematology at Nationwide Children’s. “I took this problem to our incredible design team and asked them to help our hemophilia team create a solution that would be cost-effective, friendly, safe, engaging for children of any age, and help with adherence to treatments ultimately leading to better outcomes.”
Jeremy Patterson, lead of User Experience Technology R&D and head designer for the project at Nationwide Children’s, rose to this challenge and his team created a virtual reality environment that is customized specifically for patients with hemophilia. And, he acknowledges, it is definitely fun.
“I have made lots of games and know what appeals to kids and what doesn’t, but creating something that has actually helped children have a better patient-experience, there is nothing greater than that,” said Patterson.
The team at Nationwide Children’s is currently exploring how this technology could be used in the home setting for the multiple infusions patients with hemophilia get each week. They are also testing how virtual reality technology can make a difference in educating clinicians.
“The feedback we have gotten so far has been really positive,” said Dr. Dunn. “As “One Team” we designed an approach that is truly engaging and immersive for kids and is customized to their needs, and we believe it will really make a difference in their treatment and outcomes.”
Watch how virtual reality games make infusions easier on young patients. 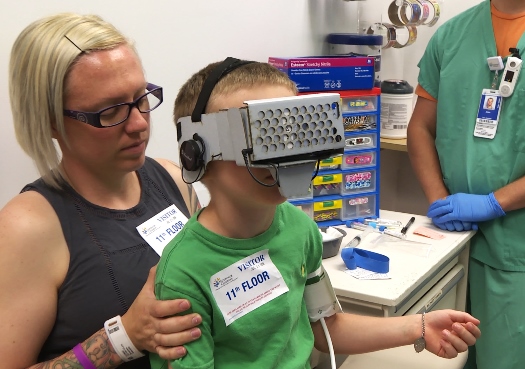 This study has been supported in part by Award Number Grant UL1TR001070 from the National Center For Advancing Translational Sciences.