A study published today on the safety of human breast milk bought over the Internet found that 10 percent of samples contained added cow’s milk. The discovery that purchased samples of human milk may be purposely “topped off” with cow’s milk or infant formula confirms a danger for the large number of babies receiving the purchased milk due to medical conditions. These babies are also vulnerable to the risk of infectious disease from bacterial and viral contamination of such milk, which was identified in a prior study by the same research team led by Nationwide Children’s Hospital.

“We found that one in every 10 samples of breast milk purchased over the Internet had significant amounts of cow’s milk added, and this poses a risk to infants with an allergy or intolerance to cow’s milk,” said Sarah A. Keim, PhD, principal investigator in the Center for Biobehavioral Health in The Research Institute at Nationwide Children’s and lead author on the study.  “If a baby with cow’s milk allergy were to drink this milk, it could be very harmful.”

The team’s previous research found that 21 percent of individuals seeking human milk online did so for a child with a pre-existing medical condition. And 16 percent of these parents specifically sought out the purchased human milk due to their baby’s formula intolerance.

Also troubling is their prior discovery of bacterial or viral contamination in more than 75 percent of milk samples purchased online, which became the first data to confirm the Food and Drug Administration’s 2010 warning of possible contaminants in unpasteurized human milk obtained from sources other than the baby’s mother.

The study published today in the journal Pediatrics is the first to document that milk purchased online is frequently adulterated with intentionally added ingredients.

“We were concerned that, because money is exchanged in these transactions, there might be an incentive to boost milk volumes in order to make more money,” Dr. Keim said. “Cow’s milk and infant formula resemble human milk and could potentially be added to boost volumes without the recipient knowing. Mothers who consider purchasing breast milk over the Internet should beware — when you obtain milk from an unfamiliar source, you cannot know for sure that what you are getting is safe for your baby.”

Dr. Keim’s team at Nationwide Children’s collaborated with researchers from The Ohio State University and Cincinnati Children’s Hospital Medical Center to purchase and test 102 samples of breast milk advertised on milk-sharing websites. The team compared the purchased samples with their own preparations of human milk diluted with cow’s milk to approximate the amount of contamination required in order to test positive for bovine DNA.

All purchased samples did contain human milk, but 11 also contained bovine DNA, 10 of which had results consistent with more than minor, accidental contamination with cow’s milk. The findings suggest that a notable number of sellers intentionally added cow’s milk or infant formula to the breast milk.

“Pediatricians who care for infants should be aware that milk advertised as human is available via the Internet, and some of it may not be 100 percent human milk,” said Dr. Keim, who also is a faculty member at The Ohio State University. “And patients should be counseled against obtaining milk in this way for their infant.”

In a recent survey Dr. Keim conducted of 499 women, published in Breastfeeding Medicine, 25 percent of women considered milk sharing and almost 4 percent of women shared milk among friends or relatives or had a preterm infant who received donor milk. She suggested that women with extra milk could help a baby in need by donating their milk to a non-profit milk bank instead of selling it over the Internet.

“Quality, timely lactation support for moms who want to breastfeed their babies could help avoid the need for many mothers to seek milk online,” said Dr. Keim, who is continuing a variety of investigations into the phenomenon of Internet-based human milk donation and purchasing. “Women who have difficulty making enough milk for their child should work with their pediatrician to identify safe, healthy ways to feed their baby. The risk of contamination and added cow’s milk makes it unsafe to purchase breast milk over the Internet.”

Learn more about the research findings in this video. 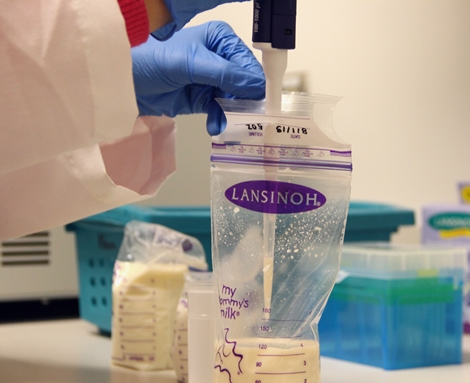 Researchers at Nationwide Children`s Hospital found that 10 percent of the breast milk samples they purchased online had high levels of added cow`s milk or infant formula.