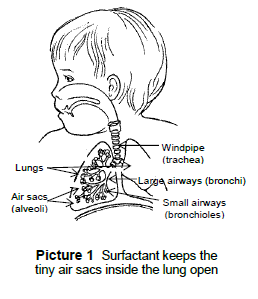 RDS stands for "respiratory distress syndrome." It is the most common lung disease in premature infants and it occurs because the baby’s lungs are not fully developed. The more premature the infant, the more likely it is for the baby to have RDS.

While RDS is most common in babies who are born early, other newborns can get RDS. Those at greater risk are:

Babies who have RDS may show these signs:

The diagnosis is made after examining the baby and seeing the results of chest X-rays and blood tests. Sometimes an echocardiogram using soundwaves is done to learn if there are heart defects. See Helping Hand, HH-III-114, Echocardiogram for more information.

Oxygen: Babies with RDS need extra oxygen to stay pink. It may be given in several ways:

Surfactant: Surfactant can be given into the baby’s lungs to replace what he does not have. This is given directly down the breathing tube that was placed in the windpipe.

IV (intravenous) catheter treatments: A very small tube called a catheter is placed into one or two of the blood vessels in the umbilical cord. This is how the infant gets IV fluids, nutrition and medicines. It is also used to take blood samples.

Medicines: Sometimes antibiotics are given if an infection is suspected. Calming medicines may be given to help ease pain during treatment.Surfactant – Surfactant can be given into the baby’s lungs to replace what your infant does not have. This is given directly down the breathing tube that was placed in the windpipe.

The road to recovery is different for each infant. Often RDS gets worse before it gets better. Some babies need more oxygen than others. Some may require a treatment of surfactant. As the baby is able to breathe better, he may need less oxygen and other help to breathe.

How to Know if Your Infant is Getting Better 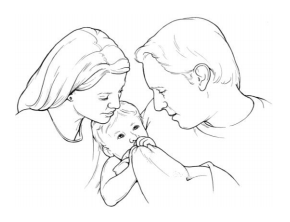 Here are some signs that your baby is getting better: