Whooping cough is another name for pertussis (per TUSS iss). It is a contagious infection of the respiratory tract caused by bacteria (germs). The germs spread easily by breathing in droplets from an infected person who coughs, sneezes, laughs or talks close to you. Sometimes, you can catch whooping cough by touching something with the germs on it.

Whooping cough gets its name from the high-pitch "whoop" sound the ill person makes at the end of a coughing spell when he or she gasps for air. Not all people with whooping cough make this sound.

Whooping cough can occur at any age, but is most common and severe in infants and children younger than 4 years old. People who have not been fully immunized (had all of their vaccines or "baby shots") are at greatest risk.

Those at risk are:

Adults can also be carriers. They may not have the symptoms but are able to infect others.

Stage 1: The first several days, your child will have cold or flu-like symptoms, such as a running nose, sneezing and a slight cough. There is little or no fever.

Stage 2: Beginning the second week, the typical "whoop" coughing spells begin and may last for 6 weeks. Some children may make choking sounds instead of the "whoop."

Stage 3: A child may have a cough or "whoop" from time to time for up to a year afterwards. 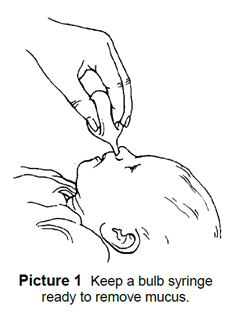 When to Get Emergency Help

Call 911 or go to the Emergency Room if your child:

Call the doctor if your child has:

What to Expect If Your Child Is Hospitalized

When Your Child Can Return to School or Daycare

Cases of whooping cough must be reported to the local Health Department. Tell the school or daycare that your child has whooping cough. It is important for school personnel to know so that other parents and teachers can watch for symptoms or get treated.

If your child's health provider gives the OK, your child may return to school after 5 days of antibiotic treatment. Children who do not take antibiotics, must wait 21 days after the cough starts. 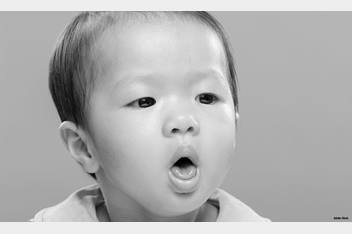 Cough Talk: What Does All That Hacking Mean?