Measles, also known as rubeola, is an infection caused by a virus. It is very contagious (spreads easily from person to person). It can be very serious in young children (especially those younger than 5 years of age), adults over 20, pregnant women and people with a weakened immune system.

Measles spreads when an infected person coughs or sneezes the virus into the air and someone inhales or touches it. The virus can stay alive in the air and on hard surfaces for several hours. Often the infected person does not know that he or she has measles until symptoms appear. Symptoms usually develop in 8 to 12 days after a person is exposed. Someone with measles can spread it up to 4 days after the rash appears.

During the early phase of the illness, the child will have flu-like symptoms:

After a few more days, the rash appears along with a very high fever.

Since it is a virus, antibiotics will not work. A sick child should have plenty of fluids and rest. Sometimes a fever reducing medicine is given, such as acetaminophen (Tylenol®). Do not give aspirin. Symptoms usually go away in about two weeks without medical treatment. If you child has a more severe case of measles (ex. needs to be admitted to the hospital), vitamin A would be given to help with symptoms as recommended by the CDC.

The best protection against measles is the MMR (measles, mumps, rubella) vaccine. It is a good idea to review immunization records before starting elementary school, before college and before traveling. Anyone who is not protected against measles is at risk of getting it.

Children should have two doses: the first dose right after their first birthday (12 to 15 months old) and a second dose before entering kindergarten (4 to 6 years old). Not all children should have this vaccine. Be sure to talk to your child’s doctor first.

Measles is not common in the United States, but is still common in many parts of the world. If traveling overseas, the Center for Disease Control (CDC) recommends a different schedule. Talk to your child’s doctor before traveling.

Call first before going to the doctor so that measles cannot be spread. Call the doctor if your child:

When your child may return to school or daycare

Notify the school or daycare if your child has measles. Cases of measles should be reported to the local Health Department.

Measles is easily passed to others. Children infected with measles should not attend school or childcare for at least five days after the start of the rash. 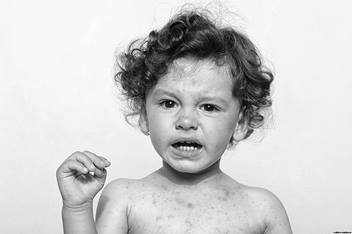 PediaCast 431: What’s Up with Measles and the MMR Vaccine?