Fifth disease is a mild illness caused by a virus called parvovirus B19. It is rarely serious. Its most obvious symptom is the bright red rash or “slapped cheek” look of the face.

The disease occurs most often during the late winter and early spring in children between the ages of 4 and 10. However, older children and adults, especially females, can get it.

Fifth disease is contagious (spread from person to person) in the early stages before symptoms appear. Once the rash appears, it is no longer contagious. It is spread by coughing, sneezing or by touching secretions from the nose and mouth of an infected person. After your child has fifth disease he or she will not get it again.

The first stage (incubation period) lasts 7 to 14 days. This is when the child can spread the disease to others without knowing.

Second stage starts 2 to 3 weeks after exposure. This is when the child is no longer contagious.

Third stage may last 1 to 3 weeks.

The rash may come back after several weeks. It can be triggered by sunlight, exercise, extremes of heat or cold or emotional stress. 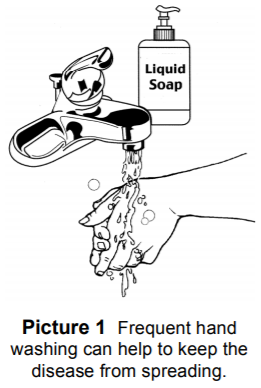 There is no treatment for fifth disease. Most children get well without treatment.

If your child has a fever or joint discomfort, you may give acetaminophen (Tylenol®) or ibuprofen (Motrin® or Advil®). Read the label to know the right dose for the age of your child.

There is no vaccine to prevent fifth disease.

To prevent the spread of infection:

Pregnant women should avoid being near children with fifth disease. If exposed, they should call their health provider. Fifth disease may harm an unborn child.

Call the doctor if your child has:

Your child can return to school after the rash disappears and he has no fever.