In the Fall 2019 issue of Inside Nationwide Children’s, we shared stories of our employees who spent time at the hospital as patients. With so many submissions, we couldn’t fit them all!

Read on for additional stories and photos:

“I have been a patient at Nationwide Children’s since 1994 in the Heme/Onc department. I was born with a genetic disorder called Beta Thalassemia Major. I am treated at Nationwide Children’s with chronic blood transfusions. I practically grew up at Nationwide Children’s, whether it was outpatient treatments several times a month, home care nursing for home treatments, surgeries, inpatient stays, you name it. And I have never regretted ‘growing up in a hospital’ because I knew I was getting the best care I could and the staff had become part of my family. Because of their care I could also still be a ‘normal’ child and that’s how I live my life now even as an adult. I get my treatments and take care of my health, but I also try to do live my ‘normal.’ When I was in high school I didn’t know what I wanted to do in college, but I knew what was comfortable. Health care and Nationwide Children’s. I saw an opportunity to get a good education, a stable job and the ability to give back to an organization that gave me so much. I am now a NICU nurse at Nationwide Children’s many years later! I love seeing my nurses and doctors at work who took/take care of me and get to join alongside them, and starting my own story as the super hero nurse.”

“I was a patient here at Nationwide Children’s starting in the early 90s. I developed chronic kidney stones and was followed in Urology by Dr. Jayanti and Nephrology by Dr. John Mahan. I was also a ‘Volunteen’ here in my high school years, and my mom worked as an administrative assistant in Endocrinology during those years. I continued having kidney issues as an adult and was diagnosed with Renal Cell Carcinoma in 2014, interviewed for my current position in 2016, and had a total kidney removal in 2017 due to the cancer. My memories of being a patient here are good ones, even being associated with a painful condition and many painful procedures. I was thrilled to be able to come back to the organization as an employee. ...The coincidence of my whole experience is that I work for the same department that I volunteered for as a teenager. And in fact, when Family and Volunteer Services moved their offices from Timken Hall to the Education Building, one of our Volunteer Program Coordinators found a Polaroid photo of me as a Volunteer. It hangs up by my desk and is a reminder of how far I have come, and how integral the hospital has been in my life.”

“Five years ago, at the age of 19, I was diagnosed with a pediatric kidney cancer called Wilms’ Tumor. I was lucky to be able to get chemo and my surgeries here, then went to The James for radiation. It was stage IV when we found it, and my treatment lasted approximately a year. During that time, I would be admitted for a week for chemo, then get one or two weeks 'off.' However, I would often be readmitted for fevers or nausea, so Nationwide Children’s quickly felt like a second home. Being treated in a children’s hospital at 19 was an interesting experience, and one that ultimately led to me becoming a child life specialist. I was closer in age to my nurses than many of the patients, which led to a profound respect for the staff here. However, much of my love for my profession came from watching patients much younger than me go through treatment. I have a vivid memory of my first appointment in the oncology clinic. I was still coping with the shock and paralyzing fear of being told I had cancer, and I was having a difficult time feeling hopeful that I would be okay. When my mom and I arrived, the waiting room was full of children, many of which who were happily playing. I was in awe of how care-free and normal the kids were despite cancer. While I do not work with the oncology population now, I take that memory into every patient interaction, with the goal of helping children cope with their hospitalization and thrive despite their diagnosis.”

“I grew up in Columbus, so Nationwide Children’s was my family’s primary care for everything. I wasn’t in too frequently as a kid, but I was here a lot as a teenager. I remember the 'old' hospital from the late 90s — seeing how massive it’s become is still something I need to wrap my head around! Probably my most distinct memory of the hospital happened when I was 15. I broke my leg in a fairly grisly fashion. ...When I got here, I was immediately taken care of and I remember the experience being really positive despite the circumstances. There was a care technician named Bart who did everything he could to make sure I was comfortable and felt right at home even when I had a bad reaction to a medication and became very nauseous. He then went out of his way to check up on me when I came for a follow-up appointment a month later. I came to Nationwide Children’s throughout my teen years for mental health care, as well. Dr. Mary Ann Murphy was my primary psychiatrist for years. The first time I ever brought myself to a doctor’s appointment was here, actually. I was freshly 18 and terrified that I would mess up somehow, but everyone I interacted with was beyond friendly and the secretary in Dr. Murphy’s office helped me through all the procedures and paper work. … Overall, I have really positive memories of Nationwide Children’s from growing up, which is kind of funny because no one really wants to go to a hospital, right? But I remember always being taken care of, leaving better than I felt going in, and just being surrounded by such positive people every time I was here.” 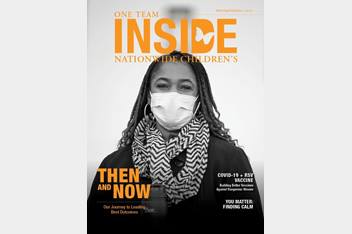 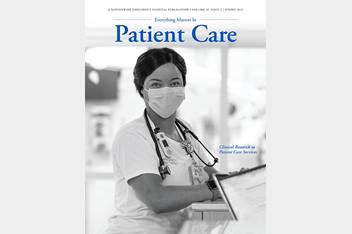 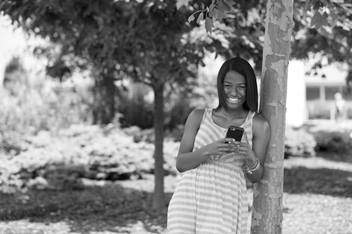