James Murakami, MD, MS, is a pediatric interventional radiologist who has worked at Nationwide Children’s Hospital since 1999. He earned his medical degree from the University of California at San Diego Medical School in 1990 and a master’s degree in Bioengineering at the University of Washington in 1996. He is board certified in Diagnostic Radiology and Pediatric Radiology with advanced training in Pediatric Interventional Radiology (IR). Since joining Nationwide Children’s, Dr. Murakami’s clinical work has been centered on IR with special focus on sclerotherapy and minimally invasive percutaneous treatments of a variety of illnesses.

The sclerotherapy treatments performed in IR allow Nationwide Children’s to function as a Destination Medical Center for a variety of illnesses. Much of this stems from the work of William E. Shiels who passed away in 2015.   Dr. Murakami was extremely fortunate to have been friend and colleague to Dr. Shiels for over 15 years. Building on Dr. Shiels’ work, Dr. Murakami and colleagues now routinely treat patients from around the world with a diverse group of conditions including: 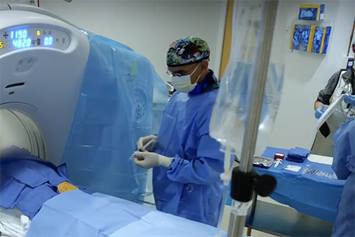 Using advanced imaging technology, Dr. James Murakami and his IR team insert medicine directly into a disease through small needles or probes. It can be a game-changing treatment option for kids suffering from rare conditions or diseases, including certain types of cysts or tumors.