As health systems across the United States try to improve the health of entire populations, many are looking at the role that affordable, high-quality housing can play. The American Hospital Association and Center for Community Investment have worked together in saying that hospitals should invest in this kind of housing; the state of New Jersey announced a program in 2021 that would make it easier for hospitals and housing developers to become partners.

But how can a hospital with no housing experience enter the space? A 60-unit, $16 million rental housing development that recently broke ground on the South Side of Columbus, Ohio, spearheaded by Nationwide Children’s Hospital and its partners, may help provide a roadmap -- especially in the way the collaborators have come together to secure and use low-income housing tax credits.

Most people use the abbreviation “LIHTC,” pronounced “lye-teck,” when talking about the credits.

“I tell every hospital I talk to that a LIHTC investment can be the best way to have an early win,” says Gretchen West, executive director of Healthy Homes. “There’s really no other way that you can put in such a relatively small amount of funding and create so much housing for people who need it. Our share for this project was $1.5 million, and I can think of no other situation where we could create 60 units with that investment.”

Healthy Homes is the partnership between Nationwide Children’s Hospital and the faith-based Community Development For All People that has helped create or improve more than 450 housing units in Columbus. Low-income housing tax credits have proven to be an invaluable tool.

The credits are provided by the federal government to states, and developers of low-income housing can apply for those credits. If they are awarded by the state housing finance agency, the developer then sells the credits, often to a bank. The proceeds from that sale help fund the construction of the housing units, while the bank is able to reduce its own tax bills.

That new 60-unit development in Columbus, called Lockbourne Greene, will ultimately have about 50% of its funding provided as a result of 4% low-income tax credits (9% credits can also be obtained in a more highly competitive process). A low-income housing developer, Woda Cooper Companies, has led the process, but there are a few basic steps that most LIHTC deals go through:

Beyond the many financial partners, the group also worked with SproutFive (formerly known as South Side Early Learning) to include classrooms for an early learning center in Lockbourne Greene. The entire process took approximately two years before ground could be broken in March of 2022, says Rev. John Edgar, executive director of Community Development for All People.

But that length of time and number of partners ensures that the project will succeed and integrate well with the community, he says. The entire point of the development for Healthy Homes, Nationwide Children’s and Community Development For All People is to improve life in a neighborhood.

Health systems interested in creating affordable housing through LIHTC may want to reach out to their state housing finance agencies to find local LIHTC developers looking for partners, says West. They would also want to retain experienced legal representation pretty early in the process, to ensure any partnership fairly distributes risk and return.

There’s certainly a learning curve for those wanting to get started. But there’s also a lot of benefit.

“Hospital executives and board members start to see how a community investment in housing can make a big difference,” West says. “Community investment starts to look more attractive to everyone. And that, in turn, helps improve the life of the community.”

A Challenge to Health Care Leaders: Invest in Communities 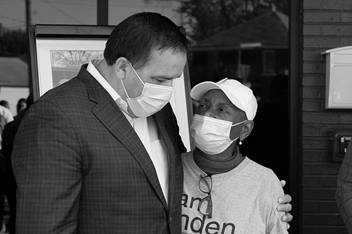 Collaboration for a Fresh Food Market and Charitable Pharmacy