In 2009, Nationwide Children’s was selected to be one of 13 translational centers under TDN to lead the newest and most cutting edge clinical trials and provide direction to the network as a whole. At that same time, TDN expanded to a total of 77 accredited sites all participating in CF research. This expansion has led to a powerful group dedicated to CF research and has yielded substantial progress.

The organizational structure, insight and unique collaboration among centers such as ours at Nationwide Children’s, and others including the Cystic Fibrosis Foundation, the National Institutes of Health, the FDA and a group of committed industrial partners, combined with a comprehensive national database, has allowed outstanding progress toward the best possible care and even potential cures for CF. It is a privilege to be a part of this effort which serves as a model for other disease processes. This model has been so successful that the European Union countries have begun to recreate the network in Europe.

Nationwide Children’s therapeutic development site is among the largest three or four in the country with participants in a wide variety of clinical trials in all phases. We have developed a network of clinical and basic scientists at both Nationwide Children’s and our partners at The Ohio State University. These collaborations have led to ongoing studies, opportunities for fellows and faculty to collaborate and a significant surge in basic research and in our ability to attract top fellow applicants to sustain efforts to provide top-notch pulmonary clinical care and investigation for the future.

Our partners at The Ohio State University include:

Anne May, MD, is leading an ongoing quality improvement project to identify patients with advanced lung disease and assessing these individuals for sleep disordered breathing. Patients are identified in weekly rounds if their CF Registry Data show the specified lung function. They are screened with a combination of objective data (saturation while awake), validated sleepiness scale (Epworth) and clinical questions targeting hypoventilation.

Rohan Thompson, MD, and Chandar Ramanathan, MD, are investigators on this project exploring the association between oral health, nutrition and pulmonary health in children aged one to six years old with CF. This is an observational comparison study with healthy control subjects in collaboration with Nationwide Children’s dentistry.

Through a review of UNOS databases the outcomes will be evaluated for CF transplant patients with and without induction and which is superior. This was presented as a poster at the 2013 North American Cystic Fibrosis Conference. Stephen Kirkby, MD, MS collaborated with Don Hayes, Jr., MD, MS and Bryan Whitson, MD, PhD, a cardiothoracic surgeon at The Ohio State University Wexner Medical Center.

The goal of this project is to see if autophagy stimulating therapeutics can clear B cenocepacia infection. Benjamin Kopp, MD, is collaborating with Amal Amer, MD, PhD and Mikhail Gavrilin, PhD, both from The Ohio State University Wexner Medical Center.

In a pilot project with the general CF population, Melissa Holtzlander, MD, studied the comparison of the results of this non-invasive test in CF and non-CF patients. She found significant differences between the CF population and non-CF. She is currently applying for grant support to further look at this difference and its potential use as a noninvasive biomarker for gene specific medications.

This study is aimed at determining the utility of leukocyte gene expression as a biomarker of varying pathogen acquisition in CF and also as a marker of systemic response to therapy. Benjamin Kopp, MD, is collaborating with Rohan Thompson, MD, and Asuncion Mejias, MD, PhD, from The Ohio State University Wexner Medical Center.

Stephen Kirkby, MD, MS, will be comparing different phenotypes of CF (with the same genotype) to understand the impact of micro RNA subtypes in determining extremes of disease severity. Work will be done to see if there is identity between m-RNA in upper and lower respiratory tracts of individual patients. If proof of principal is established this project will be expanded to determine differences dictated by genotypes, age, infectious agents.

Individuals with Jeune’s syndrome are born with severely restricted chest volume (small chests), which leads to pulmonary insufficiency, respiratory failure and ultimately death. For the past several years Melissa Holtzlander, MD, has worked collaboratively with our thoracic surgeons to provide medical and at times surgical options for this group. The program, originally under the direction of Robert Castile, MD, MS, and Terry Davis, MD, has been assumed by Dr. Holtzlander and Patrick McConnell, MD, and has been globally noticed with a number of national and international referrals. The next phase of the program will begin to explore a number of issues and comorbidities to help improve quality of life for these special children.

This is an ongoing observational review of routine screening throat cultures (bronchoalveolar lavage if clinically indicated) and a potential correlation with clinical course and chronic radiographic changes in an attempt to identify other pathogens of concern beyond Pseudomonas aeruginosa.

Monitoring for Hearing Impairment in Patients with CF

CF patients may receive a variety of ototoxic (damage to hearing) medications over the course of a lifetime. CF patients are also exposed to other general risk factors (loud noises) for damage to hearing. In a project designed by Chandar Ramanathan, MD, we have provided audiology testing within our CF clinics in order to monitor for early changes and avoid further damage.

Anne May, MD is working on this project to address the needs of CF patients at the end of life. The goal is to create an educational program to help staff identify patients just as they enter this window, work with them to determine what are the desires of the patient and family, discuss difficult topics (living will, advance directives) and treat physical and psychological symptoms associated with end of life. Patients and caregivers, clinicians in a variety of disciplines, educators, palliative specialists and other CF centers in achieving this important project which should be a part of clinical caring, curricula and life for all.

Pathogenesis of rhinovirus (RV) and interaction with Pseudomonas aeruginosa (Pa) in CF lung using CF human bronchial epithelial cells (HBEC); these are primary cells from explanted lung and are compared to the effects in primary normal HBEC. In the in vitro model used, RV infection results in increased adherence of Pa to CF bronchial epithelial cells, but this is not the case in normal HBE cells. Among CF derived tissue the increased adherence is found whether or not the CF patients are colonized with Pa previously. These data suggest that RV infections may facilitate binding of Pa. A better understanding of this relationship may allow development of novel therapies to prevent and treat common viral infections in CF patients.

Benjamin Kopp, MD is examining the effects of light therapy on depression, quality of life and length of stay for hospitalized CF patients.

This project is exploring an analysis of right heart catheterization data to determine significant mechanisms responsible for developing PH in patients with CF. Stephen Kirkby, MD, MS, is working with a second year pulmonary and critical care fellow, Dan Gorbett, MD, and collaborating with Don Hayes, Jr., MD, MS and Curt Daniels, MD, from The Heart Center at Nationwide Children’s.

A Retrospective Chart Review of Mutations in CF

All of the Ambry genetic testing sent over the past seven years is being reviewed to help understand the complexities of CF diagnosis, and to evaluate the relationship between genotype and phenotype for some of the less common mutations.

At pre-transplant evaluations of patients with CF, a majority were found to have inadequate immune response to hepatitis B (based on quantitative titers). As CF patients’ transplants are at higher risk for CF-related liver disease, as well as hepatotoxicity from other therapies, and are exposed to transfusion, it is vital that these patients are adequately protected against hepatitis B. Grace Paul, MD, leads this study to evaluate more general vaccine induced immunity in CF patients compared with healthy controls. Planned is a characterization of the phenotype of those with lower immune responses and assessment of the effectiveness of booster vaccine administration. Finally, is to investigate whether the reduced immunity is related to the CFTR mutation in B lymphocytes.

One of the most exciting developments in the CF world is the preparation of gene specific mediations which modify function in the membrane channel responsible for disease manifestations in CF. This series of medications have been made possible by the extraordinary partnership between the Cystic Fibrosis Foundation, the TDN sites, the FDA and industry partners. The series of medications described here are from Vertex Pharmaceuticals. After trials in which the Nationwide Children’s participated, early in 2013, the first of these compounds (Kalydeco or Ivacaftor) was approved by the FDA. This medication is now available to the four to five percent of the CF population who have the gene G551D. Clinical results seen are amazing.

Presently the most common gene, F 508 del, which is present in approximately 88 percent of the CF population is being trialed with two candidate drugs (compounds VX 809 and VX 661) alone or in combination with Kalydeco. In the former we are in Phase 3 trials, the latter in Phase 2.

These trials, while not yet conclusive, are promising as the cover a large proportion of the CF population. Additionally the technology to approach the primary defect with specially designed drugs is evolving rapidly. This series of studies are numbers 2, 13, 15 and 16 below.

Another company, N30 Pharmaceuticals has developed an intravenous compound, which purports to be able to change the inflammatory behavior in the infected CF patient’s airways. The compound is designated N6022; these trials are in Phase 1 B study at the present. The compound is capable of being formulated for oral use, and should the results appear promising, pursuing that formulation is expected shortly. The current trial is number 11 below. 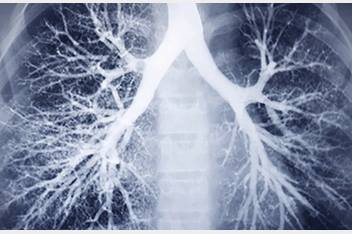 Measuring the Progression of CF in School-Aged Children

Eosinophilic Pneumonia Brought on by Vaping