“Andelyn” combines their names to represent all the families who have courageously participated in the research that makes today’s gene therapies possible. 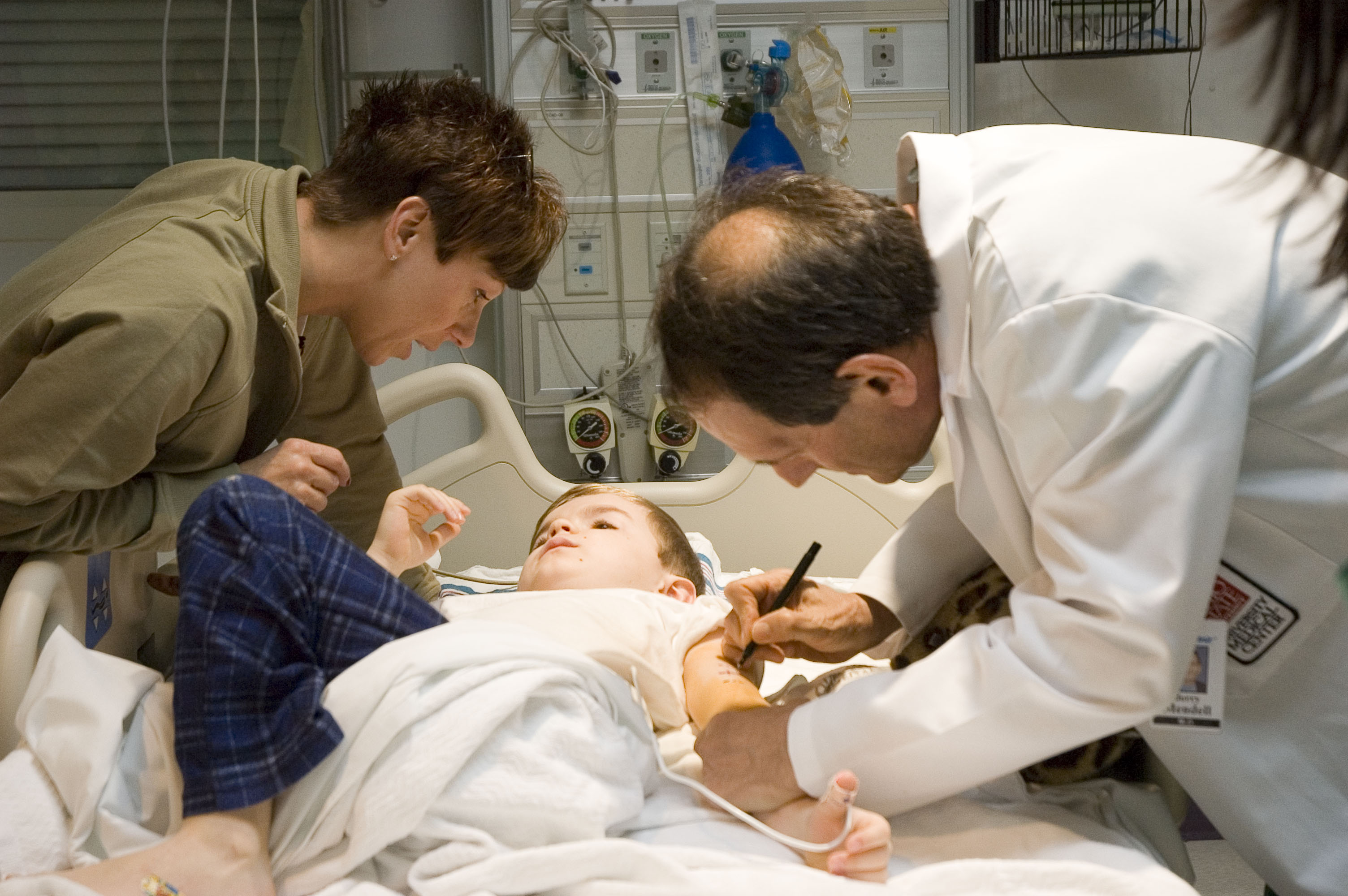 In many ways, Andrew is just like any other 22-year old young man. When he’s not attending classes at Ohio University in Lancaster, he enjoys gaming and spending time with family.

More prevalent in males than females, children with DMD lose mobility and strength in their muscles. The disease then progressively affects their heart.

Immediately after hearing his diagnosis, Andrew’s parents, Julie and Mike, began to research doctors who could offer the most help for Andrew.  They found Jerry R. Mendell, MD, a world-renowned neurologist right in their backyard in Columbus, Ohio, at Nationwide Children’s Hospital.

In 1989, after more than two decades of study and caring for patients with neuromuscular disorders, Dr. Mendell was the first scientist to publish a study showing that corticosteroids were the only effective treatment known to decrease the progression of DMD.

He also is the first doctor to demonstrate that gene therapy could be a safe, effective option for DMD. Through his and his colleagues’ pioneering research, in March 2006, Dr. Mendell was the first to inject microdystrophin, a shorter but functional version of the protein that is missing in DMD, into an arm muscle of a young boy with DMD. That boy was Andrew Kilbarger.

The injection, using an adeno-associated virus (AAV)-mediated vector, delivered microdystrophin to the muscle producing a functional protein that reduced muscle deterioration. “Andrew is so important because his injections proved the safety and efficacy of this therapy,” Dr. Mendell explains.

As Andrew continues his life’s journey, Dr. Mendell notes that “he is very determined, and he takes on challenges. It’s extraordinary for someone his age to function and be independent the way he is.”

For Dr. Mendell, Andrew has a special place in his heart, and in the history of gene therapy research. “He’s like my grandson. We’ve done this together.”

This article is based on a story by Cher Jaurigue in Lancaster Living Magazine. 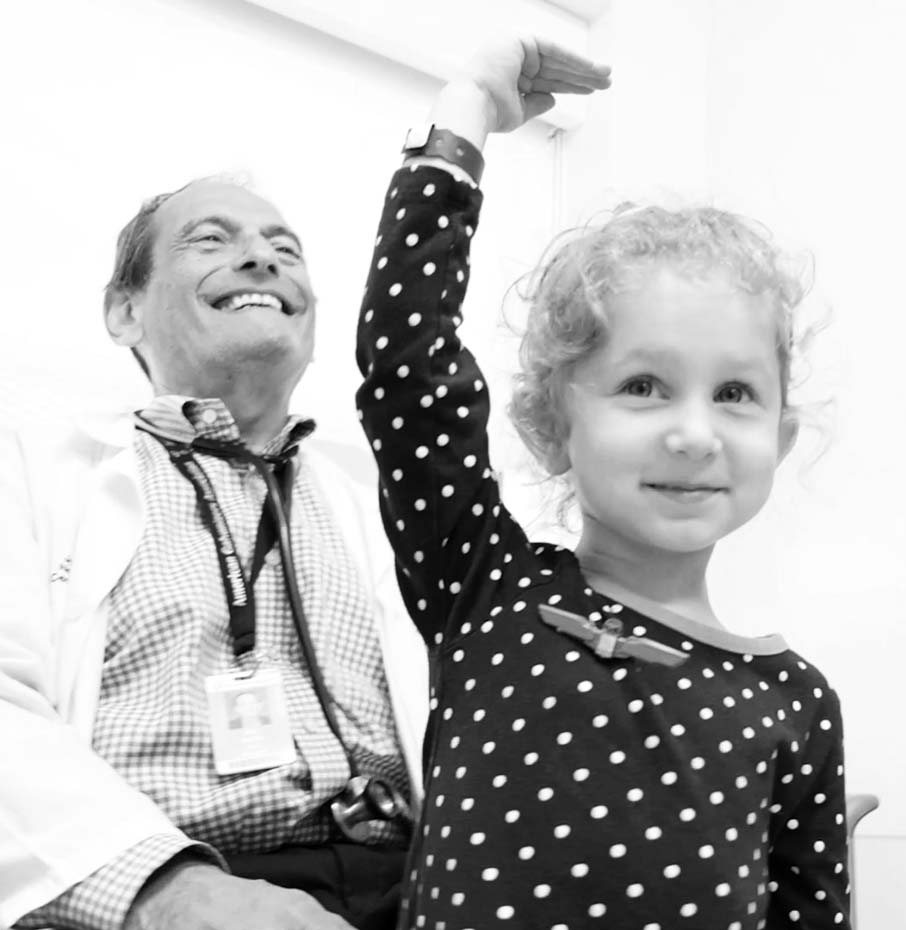 Above: Evelyn is pictured with Dr. Jerry Mendell, years after being given investigational gene therapy to replace a missing SMN1 gene.

SMA is a collection of genetic disorders caused by a loss of motor neurons that control muscle movement. SMA type I is the most common form of the condition. Specifically, the SMN1 gene is missing in these children. The disorder robs babies of their ability to move, talk, swallow and eventually breathe.

Josephine passed away at 15 months old.

“The disease is devastating for infants,” says Jerry Mendell, MD, renowned neurologist and researcher at Nationwide Children's Hospital. “A large percentage of SMA patients die before one year of age, and more than 95% are gone by age 2.”

The Villareal’s second child, Evelyn, was born in 2015. She also was born with SMA.

“When she was born and the results came back that she was positive for SMA Type 1, we both just broke down,” Milan recalls.

They searched for answers and options, and discovered the clinical trial for SMA Type 1 at Nationwide Children's.

At just 8 weeks old, Evelyn was given an investigational gene therapy to replace her missing SMN1 gene. The gene therapy worked. Four years later in 2019, the therapy was approved by the FDA as the first systemic gene therapy for a neuromuscular disease.

“I forget that she has SMA,” says Evelyn’s mom, Elena. “She’s a healthy girl and does everything a normal child would do.”

The SMA gene therapy trial Evelyn participated in earned the distinction of being one of Science magazine’s Breakthroughs of the Year in 2017. Evelyn and her parents were featured in a story accompanying the top ten breakthroughs.

From the Science  article, “Although she has weak thighs and can’t run normally or jump, she can walk quickly, dance, trace letters, toss foam blocks, carry a small chair, and climb onto her mother Elena’s lap. After the heartbreak of losing their first baby, the Villarreals have watched in amazement as Evelyn has crawled, walked, and talked. ‘It was just a miracle. Every milestone was like a celebration,’ Milan says.

“The results of the trial Evelyn participated in have blown away gene therapy researchers, too, marking one of the once-troubled field’s most dramatic successes yet.

“The new treatment’s apparent safety and success is emboldening other researchers to use gene therapy delivered into a vein or the spine to treat rare childhood neurological and muscular diseases, and even common adult disorders such as Parkinson’s disease. ‘It opens up a whole new concept to a field that has been very cautious,’ says Federico Mingozzi, who recently left the French nonprofit Généthon to become chief scientific officer of the gene therapy company Spark Therapeutics in Philadelphia, Pennsylvania.

“People are going to look back and see this as a milestone in a new type of medicine that’s going to have broad implications for lots and lots of diseases," adds gene therapy researcher Steven Gray of the University of North Carolina (UNC) in Chapel Hill.