We want to make your child as comfortable as possible after surgery. Children who are not in pain after surgery are often able to return to normal activities sooner. One of the
best ways to control your child's pain is to use a method called a caudal (KAW-dul) block. This method is often used when the surgery involves the area near the navel (belly button)
or below it.

What is a caudal block? 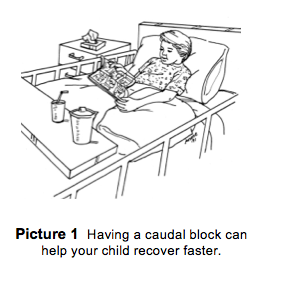 The caudal block is a numbing medicine given through a small needle into the lower back near the tailbone. The anesthesiologist will explain the caudal block procedure to you.

In the Operating Room, your child will first be helped go to sleep with a general anesthetic. After he or she is asleep, the anesthesiologist will give your child a caudal block if needed. The needle is removed right away and the surgeon starts the operation. A caudal block may be placed at the beginning or the end of the operation. After the surgery your child will be watched in the Post Anesthesia Care Unit (PACU) until he or she is ready to return to the hospital room.

Benefits of a caudal block

Often, less pain medicine is needed after surgery. This means your child may be able to return sooner to normal eating, drinking and activity.

What to expect after a caudal block

When to call the doctor

Sometimes children have trouble urinating (going to the bathroom) after surgery. Surgery, anesthesia or the caudal block medicine can cause this. If your child has any problems,
please call his or her surgeon.